ORGANISERS of the Cork City Sports International Pre-Olympic meet on Tuesday July 17 at the CIT Athletic Stadium are confident that Brian Gregan, 22, a finalist in the men’s 400m at the European championships in Helsinki this evening will compete in this year’s sports.
The Clonliffe Harrieras is a live medal hope after another impressive performance in the semi-finals that saw him claim automatic qualification by finishing second.  At this stage in his career, Gregan, who was a silver medallist at last year’s European U23 championships in Ostrava, has to approach every race as a final and he did just that in yesterday’s semi-final when his time — 45.76 secs — was just short of the pb he set at 45.91 in Wednesday’s first round.
Victory went to the gold medal favourite, Pavel Maslak (Czech Republic) in 45.76 secs, but Gregan’s powerful run down the finishing straight left Kacper Kozlowski (Poland), 46.54, and Eric Kruger (Germany), 46.68, scrambling for qualification as fastest losers.
Going into the semi-final as the fastest qu

alifier, Gregan was handed the prime lane six and he made the most of it by creeping up on the two athletes outside in the first 200m before tacking on the big boys on the bend. “I knew I was going to get through in second (position),” he said.  “I’m delighted with the time. Having run 45.6 and 45.7 back to back, that was a big time out there.  “I’m in the final now and hopefully I’ll run well again in the final.  “I know I can run faster than that.”
Jessie Barr, who will also attend the Cork City Sport meet and who hails from Waterford lines up for the final of the women’s 400m hurdles after setting a new career best at 55.93 secs for fourth place in yesterday’s semi-final to qualify as one of the two fastest losers.  The race was won by Anna Yaroschuk (Ukraine) in a pb of 54.69 secs from Denisa Rosolova (Czech Republic), 54.71 secs and Yelena Churakova (Russia) 54.92 secs.
“I had the fastest of the semi-finals on paper,” she said.  “There were three very quick athletes ahead of me so I was eyeing up fourth place.”  She has drawn Lane two for this evening’s final but, unlike her first round heat when Lane one was vacant, she will have an athlete in the inside lane this time.  “There is going to be no holding back,” she said. “Lane eight suited me because I’m tall and I’m in the final now.  “The stadium was quite empty yesterday but this time the race will be in the evening and the stadium will be full.  “The atmosphere will get the adrenalin going and drive me on. I thrive on the extra pressure.”
Barr’s younger brother, Thomas, who will also be in Cork on July 17 featured in yesterday’s semi-finals of the men’s 400m hurdles but he failed to get through after finishing fifth in 50.22 secs, his second fastest time ever.
Irish athletes in action today (Irish time)
6pm: 400m hurdles Women’s final: Jessie Barr. 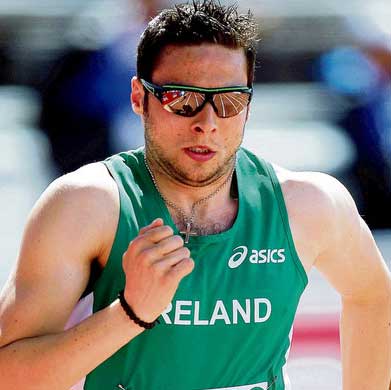