It was indeed with a sense of great sadness and loss that we have learned of the untimely death of our beloved Meet Director and dear friend Richard (Dick) Hodgins.While Dick had been ill for some time he continued to be actively involved in the role as Meet Director of the Cork Sports up to Christmas 2015.

In November Dick received the Lifetime service to Athletics Award from Athletics Ireland. While Dick was unable to attend in person, the award was accepted on his behalf by his son Ricky and daughters Carol and Jill. This award so richly deserved by Dick was also a great tribute to Dick’s family, his Club Leevale , Cork City Sports Committee and Cork Athletics generally.
This award obviously recognised the exceptional and outstanding contribution to Athletics, over a lifetime by one of our own. Before joining the Cork City Sports Dick was for many years treasurer of Leevale AC . Between 1992 and 2011 Dick was Chairman and Meet Director of The Cork City Sports and under his 19 years stewardship, the Cork City Sports became a high profile track and field sports meeting, at one stage ranking no 3 in its class in European Athletic Association sports meetings, and continues to be highly ranked in its category, attracting competing athletes from over 35 countries annually. Dick continued in the role of Meet Director and Athletes Coordinator up to the time of his death, a role for which he has been well known and respected worldwide. While Dicks role as a Sports Administrator is well known and documented, Dicks career in athletics is a litany of success and achievements.
Dick was the first schoolboy to break five minutes for the mile when he won the South Munster Schools championship at the Mardyke, his time of 4:48 breaking the old mark of 5:05.
On a warm Tuesday night in July 1963, Dick won the Irish 1500m title held as part of the Cork City Sports. Over the next 12 years, he went on to win 14 Irish titles.

In 1967 he became the first Irish champion under BLE when winning the 15-mile title from Cork to Cobh. The same year, Dick ran the 5000m for Ireland in the Europa Cup in what was BLE’s first track and field international.

The Olympic year of 1968 saw Dick winning the Irish 10-mile track championship, recording a time of 48:48 on the old cinder track at Santry. Injury ruled him out of that October Olympics where he was hoping to qualify in either the 10,000m or marathon.

In his international marathon debut in Spain the following year, he finished a close second to the Olympic champion, Mamo Wolde, his 2:25:02 being only 11 seconds behind the Ethiopian.

Some of the famous marathon races he ran abroad included the Kosice, Enshede, Prague, Amsterdam and Rotterdam events. He won three of the four international 10,000m races he took part in.

I have known Dick since I joined Leevale in 1970 and I had the pleasure of being on many victorious Leevale teams with Dick when Leevale won every Club competition from the GEORGE V RYAN trophy to National Leagues and National relays.

As President of the Cork City Sports over the last 10 years it has been a great honour and pleasure for me to work with Dick. We attended a number of international conferences together,and the esteem and high regard in which he was held by well known international Athletes and Agents is truly amazing but not surprising. Dick was a perfectionist,totally honest ,caring and lovable. He was a thorough gentleman and friend and it has indeed been my great pleasure to know and work with Dick .
We on the Cork Sports Committee had big plans for a big celebration in Cork to honour Dick’s recent awards,but alas sadly it was not to be. However let us instead celebrate a truly remarkable life and wonderful person and thank God for giving us the unique pleasure of knowing and working with Dick Hodgins.
On behalf of everyone involved in athletics in Ireland ,Europe and indeed worldwide I wish to express our sincerest and deepest sympathies to Dick’s wife and family
Go ndéana Día trócaire air a anam 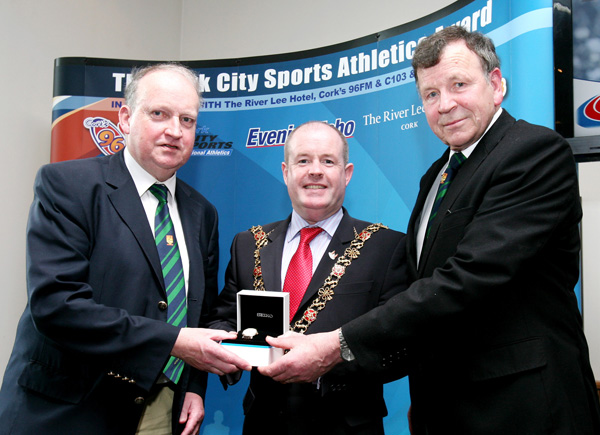